You may not think it, but the charging tech that you use to charge your portable devices can be very important. The reason for this is that many portables devices these days are very powerful. This is true for smartphones, tablets, and laptops. One of these devices that we can gauge easily as being more powerful is smartphones, and that’s because they’re the most popular portable device in the world.

Everyone owns a smartphone. The most notable thing is that new phones are released each year. The iPhone 11 was just recently released at the time of writing this article, and with it, there were three different types of it. The iPhone 11, 11 Pro and 11 Pro Max. All of them featuring the best that Apple has to offer with their new A13 Bionic chip, and the main highlight is its use of three cameras.

The same thing is true for Android smartphones. Samsung, LG, OnePlus and even Asus have come out with their new phones this year. Each of them uses a new Snapdragon processor, better cameras and a bunch of RAM. Something that is becoming more common is using a higher refresh rate with screens such as them having a 90Hz and 120Hz screens.

Along with all the higher specs that phones are now using, the rise of 5G is causing phones to use even more power. That’s the main point right here, which is that modern smartphones are increasingly using more power, and in turn, phones are using larger batteries.

The iPhone 11 Pro Max has a 2,969mAh battery capacity. This is the largest size battery for the iPhone, and it’s not exactly too normal for an iPhone to have such a larger battery but here we are. It’s great to have a larger battery, it last longer, but when it comes to recharging it, it takes longer to get to 100%. That’s why is more important than ever to know what fast charging methods are available to use.

If you own an Android smartphone then there’s one fast charging way that you have likely heard of and probably use, and that would be Quick Charge. Quick Charge is a charging technology that has been created by Qualcomm, the same brand that creates processors that goes into Android phones. Nearly every Android phone comes with a Quick Charge wall charger, which is great because you fast charge your phone right out of the box.

Even though Quick Charge is well known in the Android ecosystem, the problem with it is that you can’t use it for charging other devices like tablets or laptops. For example, you can’t use Quick Charge for an iPhone even if you connect it to the charge port on a Quick Charge charger.

The type of charging tech that most people are going to be using in the future and are even increasingly using now is Power Delivery. The part that makes PD charging the future is that it’s used with the USB-C standard port, which is now being used with portable devices.

Every Android smartphone is now using USB-C, many laptops are using USB-C ports, and the same thing is true for tablets, too. Even devices that don’t have a Type-C port are still compatible with Power Delivery and that’s why it’s becoming the future because the iPhone is now PD compatible.

Just in case you didn’t know, the iPhone has been Power Delivery compatible ever since the release of the iPhone X and the iPhone 8. Even though the phone still makes uses a Lightning port, you can use a Power Delivery charger to fast charge the iPhone with a Lightning to USB-C charging cable. Something very cool that Apple finally did is that they now ship the iPhone 11 Pro and iPhone 11 Pro Max with an 18W PD fast charger. This is quite monumental because up until now Apple has been shipping all iPhones with a slow 5W charger, which they still do with the regular iPhone 11, but it’s still a step forward for a $1,000 phone.

The better part of the PD charging is that it can be used for more than just charging smartphones and tablets because it can also charge laptops. This is where the true value is. Many laptops can use PD for charging and connectivity. However, for laptops that use PD charging, you have to use a more powerful Power Delivery charger, because using an 18W PD charger or a laptop is not enough power for most laptops. So in this case, having a 30W PD charger or higher is the better option, and even with a much more powerful PD charger, you’re still able to use it to charge smartphones and tablets.

Meaning you can use just a single charge for multiple devices. 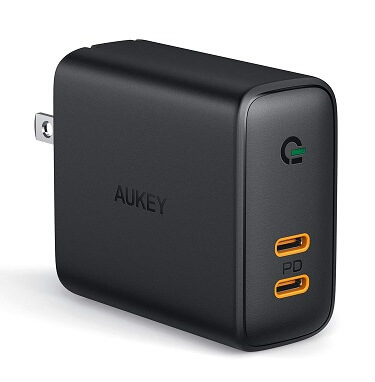 Two other parts that make charging with PD awesome is that the charging tech uses Gallium Nitride chips, or GaN for short. It also has Dynamic charging.

So the thing with GaN chips is that they take the place of multiple components within a charger. As a result, a single chip can do the work of many parts and this results in lots of power but a small form factor.

With Dynamic charging, it’s exactly what it means. If a Power Delivery charger has two ports, and you’ve got two devices recharging at the same time, then each port will output 18W. If you’re charging from only one port with this charger, then the output will be 36W, therefore, you’re getting more charging or less whether you’re charging one or two devices.